This app demonstrates how to quickly do object detection on an image and retrieve k nearest neighbors to each of the found objects. It is mostly identical to Reverse Image Search Fast, except that it operates over multiple subsets of the image (detected objects) simultaneously rather than over the whole image itself.

The below screenshot shows the basic functionality. A query image (top-center) is analyzed, and a number of objects are detected (“soup bowl”, “club sandwich”, etc). Below it is a row of similar images for each object. Similar images are computed from possibly hundreds of thousands of candidates, loaded from disk, and displayed on the app in less than 1 second, creating opportunities to be used in real-time. 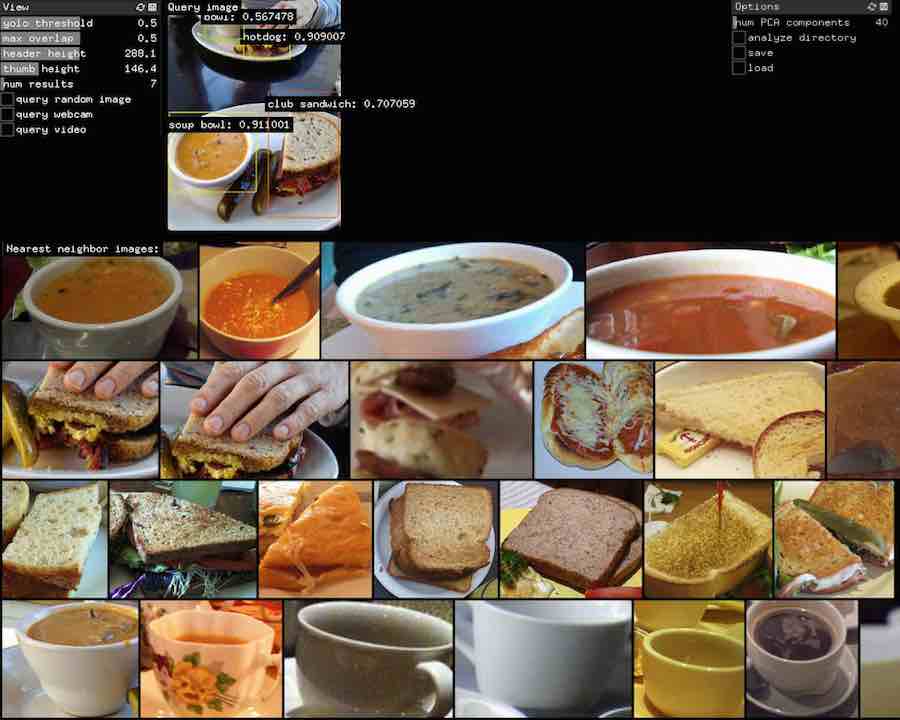 A large dataset of images is pre-analyzed by a convolutional neural network trained to detect and label salient objects found in each image. The detected objects are recorded, along with their original file paths, bounding boxes, probabilities/confidences, and feature vectors (a 1024-length vector extracted from the second to last layer of a “YOLO” convnet).

After all feature vectors are extracted, they are transformed into a lower dimensional representation (for dimensionality reduction) using a random matrix projection. It can optionally be done with principal component analysis instead, which is probably a bit more accurate, but runtime can be very high for a large corpus.

After feature extraction and dimensionality reduction, the results are serialized into a .dat file so you can load them back later.

At runtime, a new image is queried by being analyzed in exactly the same procedure as above – its objects are detected, feature vectors are extracted and projected into the same lower-dimensional subspace using the random matrix generated during the analysis phase. The projected vectors are each used to query the KD-Tree which retrieves the approximate nearest k neighbors to each object respectively (k is set using the num results slider). Those images are then loaded from disk and displayed.

The following addons are needed:

After generating the project in project generator, make sure the cfg folder which comes with ofxDarknet is inside the data folder of the application, so darknet can find the config files.

Also make sure XCode/Visual Studio can find the libdarknetOSX.dylib dynamic library by making sure the other linker flags has the correct path to it (By default it uses a relative path which won’t work if you place this app in a non-standard location).

In order to be able to retrieve nearest neighbor images, a dataset of images needs to first be analyzed. Through the interface, this can be done by clicking analyze directory, which will compile the image paths (recursively) from a base directory. Equivalently, run the following code:

The analysis may take hours, depending on how many images are in the directory. Each image can take around 0.25-0.75 sec depending on your machine.

Once analysis is done, it can be saved by clicking save vectors or running:

If you want to save just the original vectors without the projections (useful to save them while doing the analysis, in case it crashes in the middle…) you can set the featuresOnly bool to true and run:

To load the saved vectors back into memory next time you launch the application, click load vectors and select the saved dat file, then select the base directory where the images are located. Equivalently, this can be done in code:

An example image set was analyzed and prepared, which you can download and use. The image set is MC-Coco, and the saved analysis contains 376,459 detected objects from 136,199 unique images.

Unzip them and place the images into side-by-side folders ‘train’, ‘test’, and ‘val’ respectively. Make sure the images are unzipped this way because the trained vectors are saved for these relative paths. For example, the first image in the the test directory should be called something like /PATH_TO_COCO/test/COCO_test2014_000000000014.jpg where /PATH_TO_COCO/ is the location of the folder containing the images.

Next, download the saved vectors. There are 5 options, which vary according to their dimensionality: 16, 32, 64, 128, and 256. The tradeoff is that the bigger ones are more accurate, but are larger, take longer to load into memory, and query times are longer as well. I find 32 to be a good compromise but your results and the demands of your use case may vary.

All can be downloaded from Dropbox via the following link:

Afterwards, you may load them as usual following the method in the previous section. Make sure baseDir is pointing towards the parent folder of train, test, and val.

Once vectors are loaded, the application can analyze a new image and find nearest neighbors for each detected object. There are three input options, which are selected via toggle.

1) query random image: this will randomly load an image from the analyzed images (in baseDir) and do the analysis on it.

2) query webcam: this will turn on your webcam and begin to analyze it continuously.

3) query video: this will let you load a video file from disk and begin playing it and analyzing it continuously.

There are several parameters to be aware of:

Another thing to be aware of is that it’s often a good idea to save smaller resolution/lower qualities images of your dataset, because if the image is large, then loading several dozen from disk for each detection may take much more runtime than the actual similarity calculation.

Why it’s useful and ideas for future development

Besides for the obvious use cases, like real-time substitution of objects in a video stream, there are more practical uses for this procedure. Being able to quickly retrieve a set of nearest neighbor objects can facilitate the rapid labeling (or relabeling) of related objects for developing new datasets.